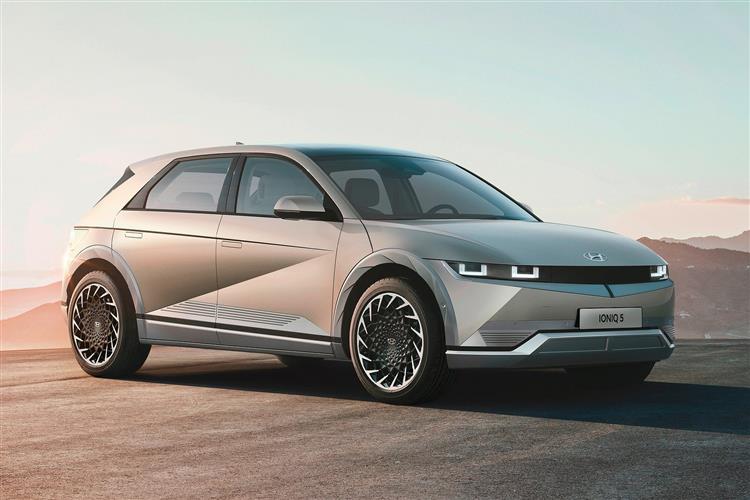 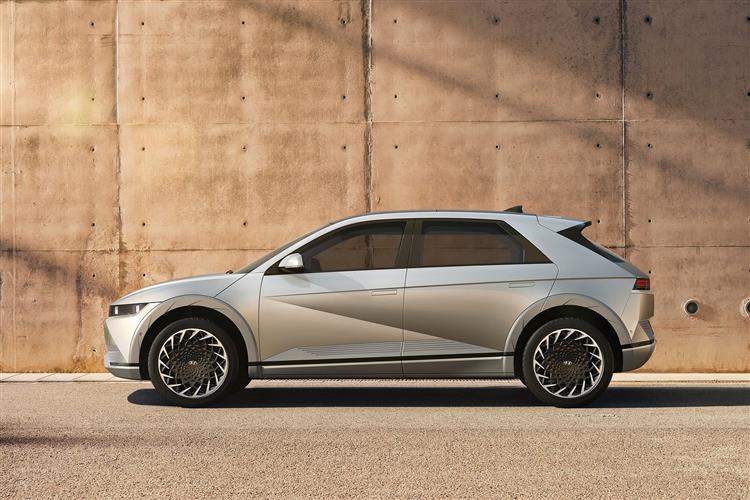 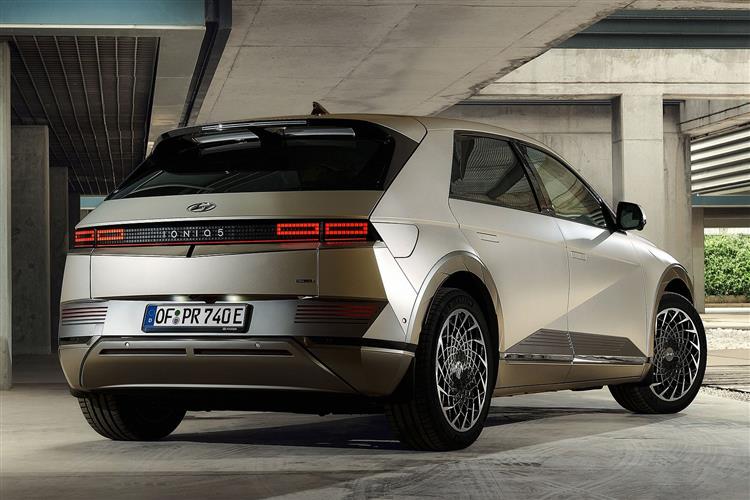 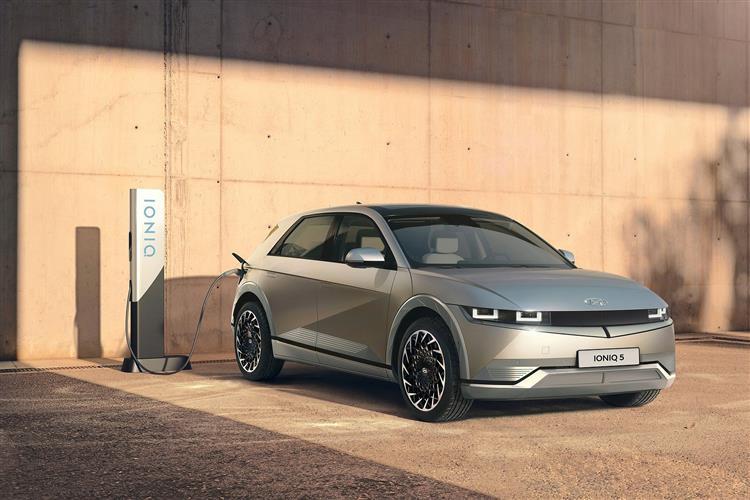 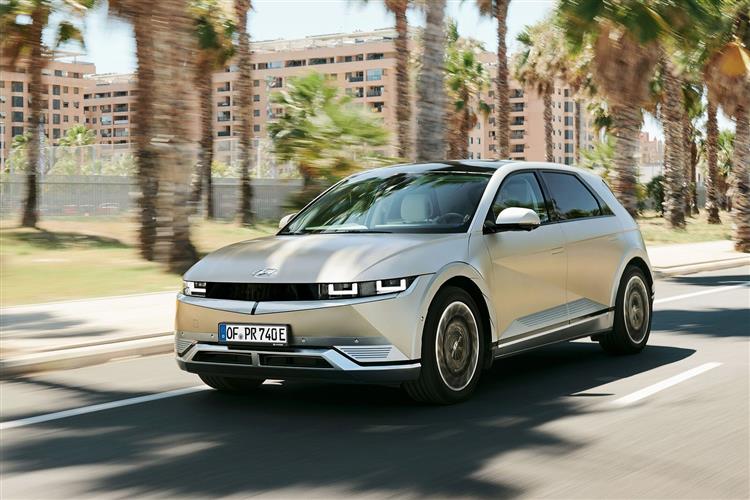 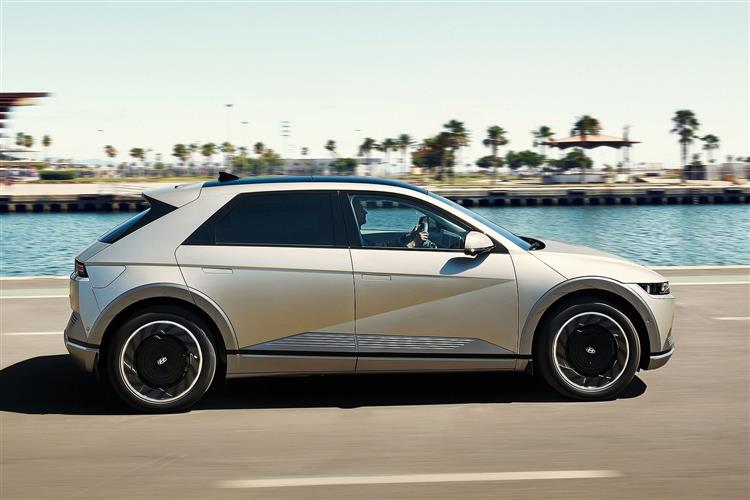 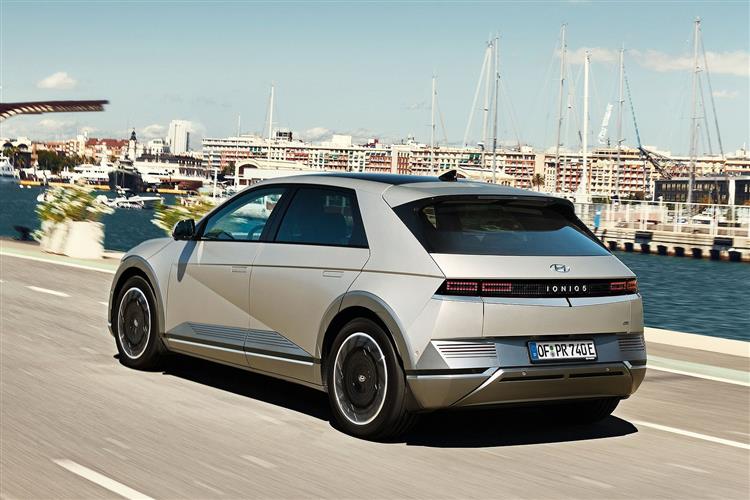 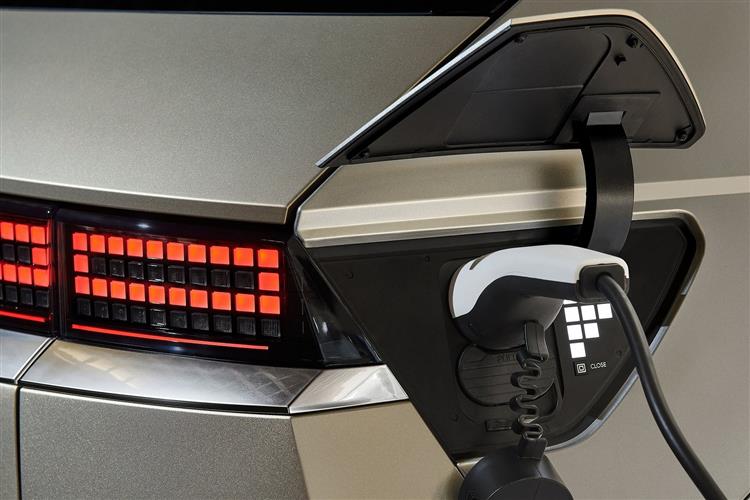 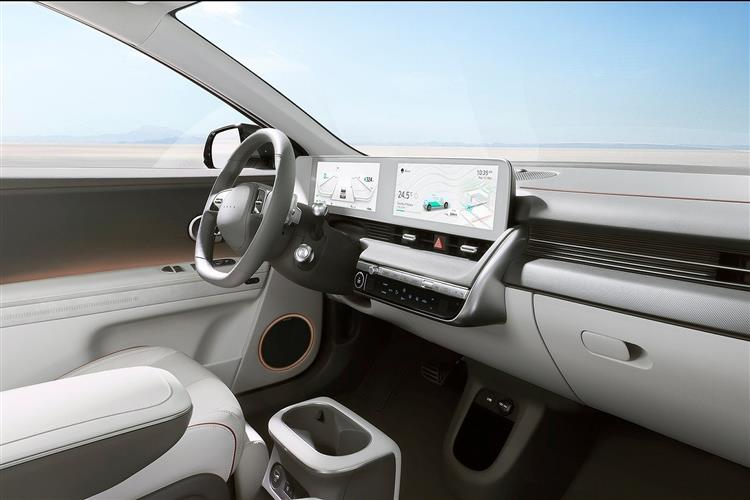 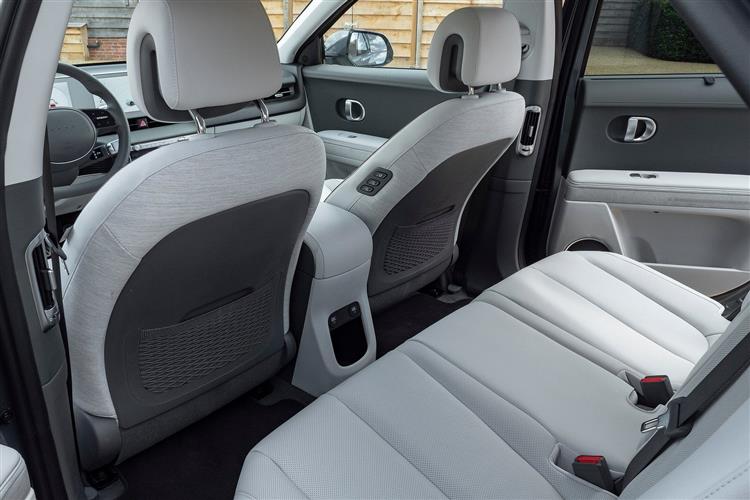 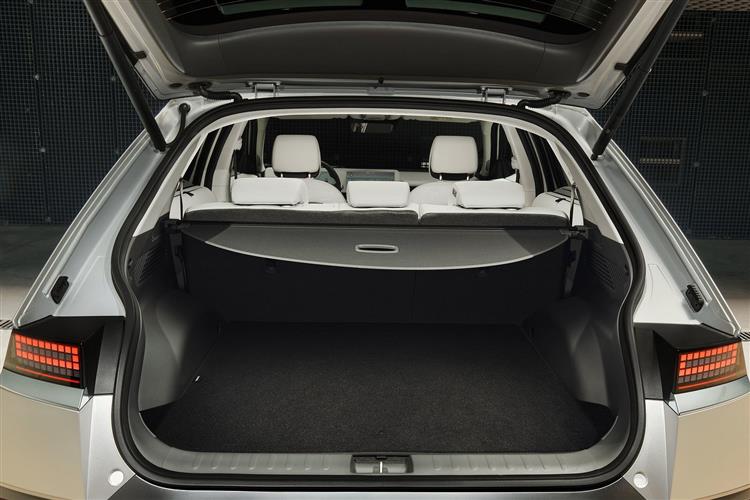 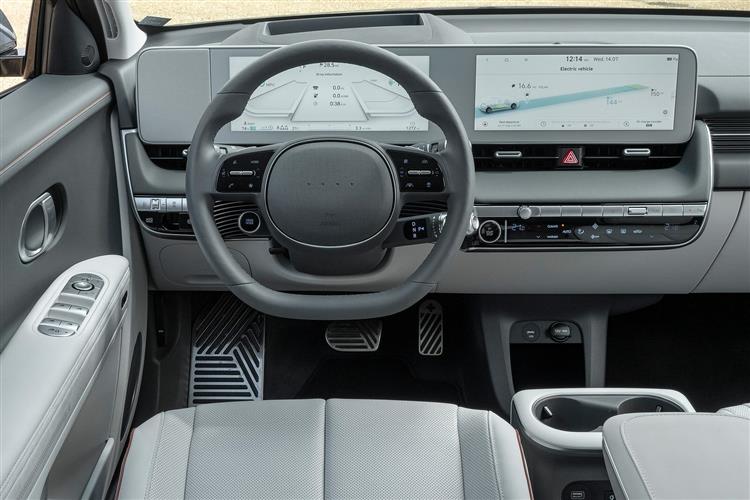 Exactly what has the EV automotive sector been lacking - apart from extended battery range? Here's my nomination: design character. Most family EVs are about as interesting to look at or sit in as a wet day at Brighton Beach: in lockdown. But this one, Hyundai's IONIQ 5, isn't. The name might ring a bell. The first IONIQ model was the first car to be available in hybrid, electric and plug-in forms - a Prius rival that went further. And this one aims to go further still, the founding member of Hyundai's new IONIQ EV sub-brand, a line-up that'll subsequently be bolstered by the IONIQ 6 (a mid-sized saloon) and the IONIQ 7 (a large SUV). This IONIQ 5 is less easy to pigeonhole, not least because of its arresting looks, penned by Luc Donckerwolke, the man behind who styled most modern era Lamborghinis. Larger than its predecessor, it's a family hatch with aggressive SUV overtones. And it makes a statement.

The IONIQ 5 sits on the all-new E-GMP platform that Hyundai has created for its future EVs. As usual with an EV of this size, there's a choice of battery pack sizes and rear-driven electric outputs, with a token AWD model at the top of the range. The base 58kWh battery model has a single electric motor on the rear axle with 168bhp and 350Nm of torque. That delivers 238 miles of driving range and gets to 62mph in 8.5s. Step up to the improved top battery version - which now offers 77.4kWh - and the rear motor gets a boost in power to 215bhp, range increases to 315 miles and the 0-62mph sprint time improves to 7.3s. The top 77.4kWh AWD model adds an extra motor on the front axle, which boosts output to 301bhp and ups torque to 605Nm, slashing the 62mph sprint time to just 5.1s, though the drive range figure falls to 298 miles. On the move, drive dynamics are centred upon comfort; to that end, the brand has engineered the mass market's very first integrated drive axle, which combines the driveshafts and wheel bearings, benefitting comfort and handling stability. There's a 'Sport' driving mode button hanging from the steering wheel for those times you want to push on a bit, on the opposite side to the phallic-shaped gear selector. SUV-specific Michelin Pilot sport 4 tyres promise decent traction and the slippery shape aids cruising refinement.

How to start in describing the way the IONIQ 5 looks? Perhaps with its aggressive clamshell nose section that'll have drivers squinting in the rear view mirrors at the fabulous 8-bit LED matrix lights with their 256 cubic pixels. Then there's the 'Zorro'-style profile panel slashes, the forward-leaning C-pillars, the flush door handles and the neat spoiler that's actually a wing with airflow slots. Ex-Lamborghini designer Luc Donckerwolke has even allowed for a solar panel roof which powers the car's ancillary electrical systems and can sometimes energise the battery too. Style-wise, this could be either a Crossover or a high riding hatch, depending on your perspective. And EV size-wise, it's a Volkswagen ID.4 rival, larger than a Nissan LEAF (this IONIQ is 4,735mm in length), but smaller than, say, a Mercedes EQC. Inside, there's plenty to talk about too, dual 12.3-inch screens dominating the dashboard and lovely front seats with limo-like deployable calf rests and a reclined 'Relaxion' pre-set mode. Some of the haptic touch buttons aren't particularly successful, but there are plenty of them, so not everything is buried in sub-screen menus. A recent change lies in the adoption of video-based digital interior and exterior mirrors, plus you can now have Digital Side Mirrors too. Thanks to a 3-metre wheelbase even larger than something like a BMW X5, there's loads of room in the back, aided by seats able to electrically slide fore and aft by up to 135mm. Boot capacity is ample at 531-litres - or 1,600-litres with the rear bench folded. There's also further 'frunk' storage under the signature clamshell bonnet.

The IONIQ 5 prices from just under £40,000 and is offered in four specification levels - 'SE Connect', 'Premium', 'Ultimate' and top 'Namsan Edition'. Prices stretch up to around £56,500 and there are two battery size choices - 58kWh and 77.4kWh. The base figure gets you an 'SE Connect' 58 kWh rear wheel drive model, even this coming well kitted out. You get 19" alloy wheels, sliding rear seat adjustment, interior mood lighting, a 12.3" LCD audio visual and navigation system with DAB, Apple Car Play and Android Auto, plus an LCD drivers instrument cluster. There's also wireless phone charging, a rear view camera, LED Multi-Faceted Reflector headlamps, rear parking sensors and Navigation based Smart Cruise Control. Plus loads of camera safety and drive assistance features - Highway Drive Assist (HDA), Intelligent Speed Limit Assist (ISLA), Lane Keep Assist with Lane Following Assist (LKAS + LFA) and Driver Attention Alert. You'll need closer to £42,000 to get the 58kWh rear-driven model in mid-range 'Premium' form. But you might prefer to spend extra money on the higher capacity 77.4kWh battery. IONIQ 5 rear-driven variants with that start from around £45,500 (with 'Premium' trim); you're looking at around £48,500 upwards for a 77.4kWh IONIQ 5 rear-driven model equipped to 'Ultimate'-spec. The 77.4kWh variant with 'Ultimate'-spec and AWD costs just under £52,000.

We gave you the driving range figures in our 'Driving Experience' section: they're very class-competitive, a 58kWh rear wheel drive model offering a combined range of up to 238 miles. The 77.4kWh rear wheel drive model delivers a combined range of up to 315 miles, while a 77.4kWh all-wheel drive variant has a range of up to 298 miles. The IONIQ 5 features 800V charging as standard, which when combined with a 350kW ultra-rapid charger will provide an 80% charge in just 18 minutes and 62 miles of driving range in 5 minutes. Connect to a more accessible 50kW charging feed, the 58kWh battery can be completely recharged in 46 minutes - it's 56 minutes for the 73kWh version. The charging system also supports both domestic wall box charging and mainstream public 400V high speed charging, using the motor and the inverter to convert the voltage from 400V to 800V for optimised charge times whenever possible. There's now an added battery conditioning feature that will enable the IONIQ 5 to automatically adapt its battery temperature while travelling to ensure optimal charging conditions when reaching the charging point, improving real-life charging performance in hot or cold ambient conditions. This function activates automatically when a charging point is entered into the vehicle's navigation system using connected routing. All IONIQ 5 models come with a 1 year subscription to the IONITY charging network, plus Hyundai's 5 Year Unlimited Mileage Warranty, an 8 Year/100,000 Mile High Voltage Battery Warranty, a 5 Year Annual Health Check, a 3 year MapCare navigation update program, a Roadside Assistance package, and a 12 Year Anti Corrosion Warranty.

If the IONIQ 5 isn't enough to position Hyundai toe to toe with the most advanced offerings from European brand automotive design, it's hard to imagine what would be. It looks arresting and lacks nothing in terms of the latest EV technology - except perhaps for a truly Tesla-style extended battery range driving figure. But you can bet that Hyundai is working on that. Is any brand faster at translating advanced concept to reality? What's even more impressive is that it does so without diluting extreme stylistic expression to something more palatable. That's certainly not happened here. Park an IONIQ 5 in the High Street and people are going to look. Invite others to join you inside and passengers are going to comment. If that isn't the feel you're after with your new EV, lots of other brands will better satisfy you. But if it is, this car is one you need to try.